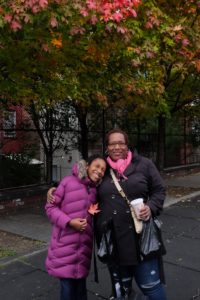 The first time Laurie Fleming visited New York City to see if it was the right fit, she knew she had to live here.

“Right after 9/11 I thought, what other place to be but New York?” she recalled. It was time for her to pursue her dreams of becoming a fashion designer.

She saved up and made the move in late 2002. But things did not work out as she had hoped and her dreams of becoming a fashion designer had to pause.

Within months of arriving, she and her son wound up in a homeless shelter for nine months. Afterward, there was a bright period, when she found work at Chase Bank and an apartment in Bushwick. She had a second child, Symarrah, in 2008. After three years at Chase, she moved on to the communications department at the General Board of Global Ministries.

But in 2009, she was laid off. Others might wallow, but Ms. Fleming saw it as an opportunity to finally get back on the fashion track.

“It was a real tumultuous and emotional time, but I said, you know, I came to New York to go to fashion school, ” she said. “I felt like that was that push to finally do it.”

But by 2014, finances became too strained as she and her family faced eviction from their Bushwick apartment when the landlord wanted to sell and housing court costs added up, Ms. Fleming said.

“It was a do-or-die situation,” said Ms. Fleming, who attended Parsons while raising her daughter, Symarrah, 10. Ms. Fleming decided she had to drop out of school, just one semester short of finishing. “It was devastating. I moved to New York, to be the first one graduating from college, and I’m right here — that was my dream, it’s still my dream. But now I need work.”

Today, Ms. Fleming has $70,000 in student loans and still owes Parsons $8,000. Because she could not work while taking care of her daughter and attending school part-time, Ms. Fleming has been unemployed since 2009.

“I tried and had applications out up the wazoo. It gets daunting when you’re trying and filling out applications and going to the interviews and getting turned down, having people telling you you’re old and dealing with that,” she said. “As a single mom, of course you’re depressed because you’re dealing with all of this and trying to keep above water.”

Ms. Fleming was dropping her daughter off at dance school in May when she noticed a flier on the bulletin board for Grace Institute. The organization, based in Lower Manhattan, provides low-income women with job skills, counseling, placement services and continuing education. Ms. Fleming applied to the administrative training program.

“It was a life-changing experience to me, because they treated you as a woman and capable, and they showed you your strengths,” Ms. Fleming said. “To be in that atmosphere and have people to treat you like you’re equal, it’s amazing.”

In addition to graduating from the program in August, Ms. Fleming also served on the Grace Institute’s participant advisory board, working as a liaison between students and staff members. She worked as an intern there until November. She is now interviewing for jobs.

“I thought my skills were lagging, after being out of work for nine years,” Ms. Fleming said. “All the strides and different mountains and hurdles that I’ve dealt with — hindsight is 20/20 — but I crossed them.”

Ms. Fleming and her daughter were sharing a bed with a broken frame and worn-out mattress and a dresser last year when Catholic Charities Archdiocese of New York, one of the eight organizations supported by The New York Times Neediest Cases Fund, used $456 from the fund to buy them a new mattress and microwave.

Ms. Fleming receives $246 a month in public benefits and $300 a month in food stamps.

She is now “ready to conquer the world,” Ms. Fleming said, emphasizing the last syllable. She hopes to do that with her daughter.

To read the full article as printed in The New York Times, please click here.